No Result
View All Result
Welcome

No Result
View All Result

“30 years of hurt, never stopped me dreaming,” go the lyrics to the famous Baddiel and Skinner football anthem released during the Euros in 1996.

The lyrics need updating to “55 years of hurt” now it’s 2021, but even so, the song remains as popular today as it was back then.

Three Lions has enjoyed an increase of 1,200% in streams during the Euro 2020 period, Spotify has revealed, proving the track still resonates with audiences today (another way of proving the song’s popularity would be by opening a window on Sunday afternoon and listening to the crowds…)

But how did the song come about in the first place, and how come comedians David Baddiel and Frank Skinner were behind the patriotic smash hit?

The song itself was created by singer Ian Broudie from the rock band Lightning Seeds.

The FA approached Broudie and asked him to write an official song to earmark the occasion of the Euros being hosted in the UK. The Association originally asked if footballers could feature on the track, but Broudie decided their contribution would make the track too nationalistic.

Broudie approached comedians David Baddiel and Frank Skinner to write the lyrics, who were at the time hosts of a comedy football show called Fantasy Football League.

“He felt that we were the nation’s football fans,” Frank said recently in a Telegraph interview. “Rather cheekily we said we’d actually quite like to sing it as well. Very cheekily, given that I can’t really sing.”

Baddiel and Skinner wrote the track in the living room of their shared home. “I can’t remember who wrote what,” Baddiel told the Telegraph. “I think when you’re in the room writing together you have a kind of joint consciousness.” 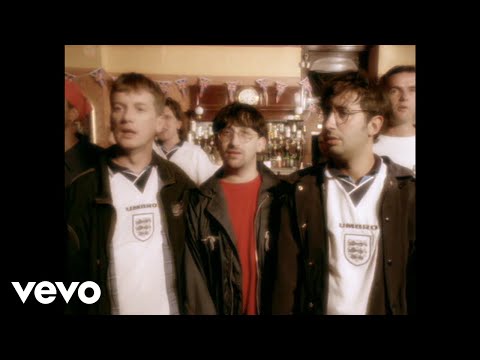 The video will auto-play soon8Cancel

The song reached number 1 on the UK singles chart, partially thanks to the Lightning Seeds, who were one of the biggest bands affiliated with the Brit Pop scene which was at its height in 1996.

An updated version of the track went straight back into number 1 on the UK singles chart in 1998 when England reached the semi-finals of the World Cup, and in total has set the record for the single with the most times at the number 1 spot, having reached it four times throughout the 25 years since it was released.

Memorably, it also held the record for the fastest-falling number 1 single, having fallen from number 1 to number 97 when England were knocked out of the World Cup by Croatia in 2018.

“Three Lions, really, is a song about magical thinking,” Baddiel told The Guardian recently. “About assuming we are going to lose, reasonably, based on experience, but hoping that somehow we won’t.”

“It’s just like Happy Birthday,” Broudie added earlier this month, speaking to Sky News about how the song has become such a familiar cultural staple.

“Even people who don’t really get into football that much now, they become emotionally involved,” he continued.

“People walk past my window late at night singing it, it just makes me smile.

“There’s a certain poetic symmetry, 25 years on… You like to feel there’s a wind blowing on your side.”

17 One-Piece Swimsuits That Will Make You Forget About Bikinis

No Result
View All Result